THE great assistance the Scout movement could give to combat juvenile delinquency in the City was stressed by speakers at the annual meeting of the Lancaster and District Boy Scouts Association, presided over by the Mayor of Lancaster, Councillor H. Butler, in the Town Hall on Friday evening.
Urging more of the youths of the City to join the movement the Mayor said it was an organisation that was an asset to the country. There was a tremendous amount of juvenile delinquency at present but he thought it was through a spirit of adventure aid not badness that children got into trouble. If it was adventure the children were seeking they could obtain it under fine conditions by joining the Scout movement, which provided a grounding that prevented this delinquency.

Although the movement performed much work about which the public never heard the good done by the movement was manifest in many ways. The recent “Bob-a-Job” week emphasised they were an actlve body and worked for the good of the community, whose support they deserved.
The objects of the movement were to cultivate a high standard in personal conduct and integrity and foster a spirit of friendliness not only locally, nationally, but also internationally. He hoped the movement would go on from strength to strength, for men and women who in early life were Scouts or Guides eventually proved an asset. Their training, formed the basis and background of good citizenship, which was reflected In a much wider circle than just in the home.

Further reference to juvenile delinquency was made by the County Commissioner, Mr. J. Dodds Drummond, who hoped that Lancaster would be one of the first cities to call a locaI conference on the problem, for he was sure that the Scout movement would have something very constructive to say at such an assembly. The whole training and principles of scouting ensured that their members avoided that sort of growing pains the youth of the country suffered from to-day. The Mayor had this question very much at heart. The assistance that the movement gave to youth was emphasised by the fact that many former Scouts had proved successful businessmen and now held highly respected positions. This was exemplified by the House of Commons section of the Baden Powell Guild of Old Scouts which had a membership of almost 100 former Scouts.

Referring to the successful “Bob-a-Job” week Mr. Drummond paid tribute to the Scouts for winning the admiration and support of the public. Speaking as County Commissioner he thanked the Lancaster and District Association for allowing so many of its former officials to join the County administrative body. Their former secretary, Mr. K. R. Stanley, who was now the County secretary, and Mr. L. Wright, the new deputy Camp Chief, were great assets to the county. The Lancaster Association has entertained visiting Scouts with truly characteristic hospitality and the County authority appreciated to the full the help of this generous and willing section.

Mr Drummond presented Dr. C. V. Stevenson, District Commissioner for South Lonsdale with his warrant, and a Scout Thanks Badge to Mr. F. G. T. Adams. Replying Mr. Adams, who was secretary of the swimming committee, for almost 20 years, made a plea for greater interest in life saving by the scouts swimming section.

The Secretary’s report, presented by Mr. W. Lord revealed that although the proceeds of three groups had not been received already £84 had been collected from the recent “Bob-a-Job” week. This meant that Scouts and Cubs in Lancaster did between 1,500 and 2,000 jobs of work and he thanked the public of Lancaster for their fine co-operation. It was pleasing to note that the money was earned and not collected.
There was an increase of almost 20 per cent in Cub membership, said Mr. Lord. Membership figures with the 1949 total given first were: Cubs 306,261; Scouts 260, 309;Senior Scouts 12, 36; Rovers 29, 18; Scouters 48, 40; totals 655 and 664. With
other groups would follow the 4th’s example during the year. The Association won the Helme shield for swimming – mainly through the encouragement of Mr. F. G. T. Adams, whose resignation, through ill-health, had been regretfully accepted.
Mr. Lord congratulated James Hudson and Harold Williams of the 13th Group for gaining the King’s Scout badge. The Association were hosts for a senior scout rally at Quernmore and were represented at the Blackpool and Filey conferences, the national St. George’s Day service at Windsor and the Scorton rally. Teams competing for the Derby Shield (first aid) were entertained by the Association and he hoped that groups of the Association would enter for this competition in the future. Numerous senior Scout and under-15 Scouts’ proficiency badges had been issued.

Reporting a balance of £217 compared with £85 at the beginning of the financial year, Mr. E. J. Leake, treasurer, acclaimed the “Bob-a-Job” week, Scout swimming galas, and other functions organised by the boys and said it was good to see that the movement earned money and did not rely entirely upon outside aid. This practice followed the Scout rule that the movement should be run by the efforts of its members and not by solicited aid. Income from donations which amounted to £109, included £85 from the British Restaurant, £12 from the Wives Fellowship and £10 from the Special Constables. The swimming gala made £23, Helme Shield gala £11, and a Giant Axe display £39. Collections raised £5 and subscriptions £24. Total income with the balance at the beginning of the year of £85 amounted to £298, against an expenditure of £82. 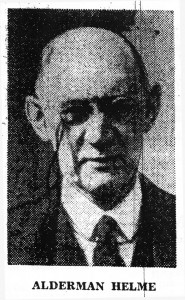 Proposing the election of County Alderman T. W. Helme, an honorary County Commissioner, as President of the Association, Mr. R. E. Wright, assistant District Commissioner, said he had been a great help to the Association. Many Scouts owed a tremendous lot to the Scouting enthusiasm of Alderman Helme.

Speaking with admiration and affection for Alderman Helme, Mr. Drummond said they were far from electing a sleeping partner and it was a comfort to know that they would have the right man at the “helm.”

Relying Mr. Helme paid tribute to the work for Scouting of Mr. R. E. Wright, who was responsible for his introduction to the movement. The happiest days of his life had been spent in Scouting and he could thoroughly recommend the movement. When he joined almost 50 years ago there was never a more raw candidate for the movement but he had learnt a lot during his membership and his heart was always with the boys particularly the rovers. He believed that what a person put into Scouting he got back manifoldly although they did not join for that reason.

The Mayor of Lancaster, who was accompanied by the Mayoress, presented warrants to troop representatives for their efforts in the “Bob-a-Job” week.
Proposing a vote of thanks to all concerned, Dr. J. A. Tomb, Association chairman, said their Association was one of the finest in the North West. He thanked those who had helped in establishing this position. Paying tribute to the Mayor and Mayoress Dr. Tomb said Councillor Butler in public and private life fulfilled the functions figuratively of a good Scout; he not only represented his personal affections but also the civic authority of the City.

Thanking the Press, Dr. Tomb said the local papers  succeeded in retaining one of the four freedoms which were insisted upon by the late President Roosevelt of the U.S.A. The most important of the four was to allow people to say what they thought. The Press had given the Scout movement  and other movements interested in the benefit of youth publicity without stint.
Dr. Tomb also thanked the public who, he said liked Scouts and enjoyed seeing them doing their tasks. He wished the public could see more of the organisation and the detailed training that members of the movement went through to make them good citizens.

Thanking. the Scout officials  he said their onerous and admirable task was to encourage young recruits.
Replying the Mayor said that the Association put service before self. .He had tried to inculcate this service into his own way of life.