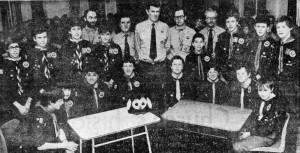 In all, 15 troops took part in this bi-annual event, with the final rounds taking place in St Chad’s Church Hall.

Each team had to answer questions from three categories: sport, general knowledge and scouting.

The 1st Halton troop won through to the final where they were beaten 36 to 52 by the 16th Morecambe, who won certificates, a voucher for the scout shop as well as the trophy which they can keep.

Mr Geoff Westwood, a district leader, explained the reason behind the competition: “At the start teams have to go to other troops for the quiz, so a whole social evening is built around the three- quarter of an hour quiz.”

• Pictured are teams from the 16th Morecambe, Halton, Caton and Carnforth scouts who took part in the final of the Lonsdale District Scouts quiz at St Chad’s Church Hall. Lancaster, with Mr Peter Ellwood. District Commissioner, centre, and other organisers and officials.—L7