THE first Carnforth Troop of Boy Scouts returned home at the weekend from their annual camp at Bangor, Co. Down, after spending an excellent week. The weather was all that could have been desired, the scenery beautiful, and the Irish boundless in their hospitality. The troop, was accompanied in camp by the 2nd Penrith Toc H Group, of which Mr. Whalan is Scoutmaster, and 13 Rovers of the 1st Carnforth Rover Crew under Rover Leader E. Wright.

The camp was divided into four patrols and worked on the patrol system throughout. Kit inspection and the ordinary camp routine was carried out daily, and the Falcon Patrol under A.S.M. J. Edgar gained the highest number of marks, a total of 64 ½ out of a possible 70, and the Seagulls under A.S.M. H. Longcake were second with a total of 61 ½ marks.

A religious service was held on the field on the Sunday.

A cricket match between sides drawn from the two troops resulted in a win for Penrith by 43 runs, whilst a football match resulted in a draw, four goals each. 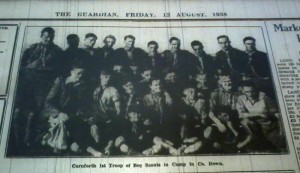 Bathing was indulged in at Ballyholme Sands and on the Tuesday Belfast and Belle Vue Zoological Gardens were visited. On the return journey it was surprising to find that an Irishman riding on the same train had paid the fares. For that the members are extremely thankful.

Donaghadee, a town with a harbour, lighthouse and castle, was visited on the Thursday, and the Scouts went out in a motor-boat to the Copeland Islands, three miles distant. Others went in rowing boats, whilst 11 of the party went for two hours’ deep sea fishing.

A camp fire was held on the Friday night when about 160 Irish people from the neighbouring homesteads gathered round the log fire and joined in Community singing of Irish songs and various items contributed by the campers including piano-accordion selections by Rover K. Keenan and monologues by Rover G.R. Whalan. At the close cocoa was served and G.S.M. S. T. Whalan was presented with a chromium plated ink-stand engraved with the Bangor coat-of-arms, by the District Commissioner, subscribed for by all those in camp in recognition of his services.

The District Commissioner (Mr. E. B. Crawshaw) spoke of his association with the troop, and in his report of the camp to headquarters, stated: “Good team work was the dominating feature of this camp. This has enabled a good standard to be maintained throughout. Of the boys’ behaviour whilst in this district I have heard nothing but good. This I can verify from my own observation; a camp which reflects great credit on all concerned, and I should be pleased for them to pay a return visit at any time.”

All too soon the week ended and the campers returned home via Belfast and Heysham after making many new friends. At Belfast the Rovers met Mr. Malcolm Speir, the manager of the L.M.S. Railway, who presented them with a gift in money. Parting gifts of Irish bread, scones, and cakes were showered on the campers by their Irish friends.

The arrangements were made by G.S.M. S.T. Whalan, assisted by the Rover Secretary F. Howarth.

Some idea of the organisation can be gained when it is stated that 180 letters and circulars were written and printed in connection with the camp whilst the stores consumed included 148 lbs. of bread; 42 lbs. of biscuits; 34 lbs. of meat; and 14 lbs. of bacon.