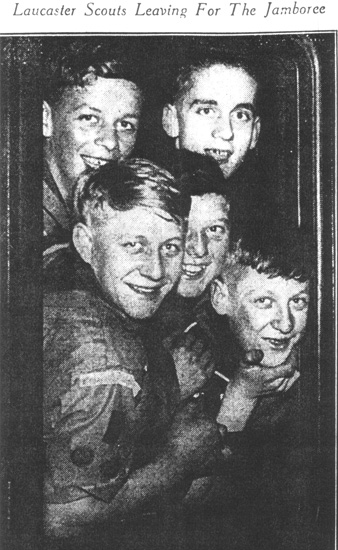 By the time these notes appear we shall be getting ready to board the “Princess Juliana” after leaving Harwich on our sea voyage to Holland, to-day, Friday. We are due at the Hook of Holland at 4.15 and a train from there should get us to the camp of the Boy Scouts’ Fifth World Jamboree at Vogelensang, Bloemendaal, at 8.42 p.m. We shall be Troop 135, forty strong, and a part of the North West Lan­cashire contingent of 180. Our com­position is made up of 21 Scouts from the 20th Lancaster (Friends’); four from the 21st Lancaster (Bowerham C.C.); one from the 8th Lancaster (Presbyterian); three from Grange; three from Blackpool; two from Black­burn, and a Prestonian. We shall be under the leadership of our Commissioner T. W. Helme with Scoutmasters S. Harbisher, A. Darlington, J. Hodg­son and myself.

H.M. Queen Wilhelmina of the Netherlands, will open the Jamboree at 2 p.m. to-morrow Saturday, when 25,000 Scouts from 31 countries will salute the Queen and Lord Baden-­Powell, the Chief Scout, in a great March Past.

Six scouts from Arnside will attend the Jamboree, under the leadership of A.S.M. J. E. Jackson.

It is with very sincere regret that I record the resignation of Mr. S. Ashby Neate, our popular Association Secretary and 13th Lancaster Rover Leader., Mr. Neate has not been in the best of health for some time and has settled with his sister in Bath. Since taking over the secretarial duties in 1932 he rendered loyal and devoted service to us, and was persuaded in 1934 to act as Rover Leader to the 13th Crew who held him in high esteem. The Execu­tive Committee intend to mark, their appreciation of Mr. Neate’s work by a suitable presentation soon. In the meantime our grateful thanks have been conveyed by letter.

The sight of two unfamiliar red motor coaches from East Kent draw­ing up in Market Street at one o’clock on Saturday occasioned no little in­terest among passers-by, especially as they discharged a load of Boy Scouts. They were the South African contin­gent for the Jamboree touring Eng­land. District Commissioner T, W. Helme received the visitors, supported by his Assistants R. E. Wright and J. Dodds Drummond, Mr. J. Pye and Mr. J. W. Ellwood, of the Executive Committee. Looking fit and well they were a cheerful party and did full justice to the lunch provided. The Commissioner extended to them a cordial welcome. In a short speech he gave concise details of historical and industrial features of the city, in conclusion extending a hearty invitation to them to visit us in Sub-Camp 5 at the Jamboree.

District Commissioner Seymour in charge of the South African contingent of 46 replied. Their tour, he said, had been a most enjoyable one. The itiner­ary had kept them on the move and they had had a busy time inspecting various industrial centres. But it was all very interesting and they were do­ing well with their time schedule. He thought they were about two hours ahead of a rival contingent from New York. They hoped to get 24 hours of peace in the Lakes which might tem­per them down after a week of roaring furnaces and galloping looms. He thanked the Lancaster Association very much for their hospitality.

After lunch, the South Africans were conducted through the Castle before leaving for Ambleside

Any notes for publication in the “Guardian” during the next two weeks should be left at the office, and it, will greatly assist the Editor if such notes are received by him not later than noon on the Wednesday before publica­tion. Thank you.