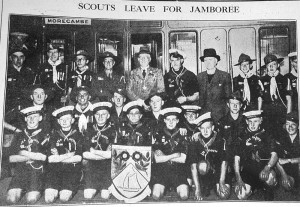 Caption reads: “The Mayor (Coun. M Benson) with Morecambe Boy Scouts, to whom he gave a civic send-off on Thursday evening, July 29th, when they left for the World Jamboree in Holland. They took with them the Morecambe Coat of Arms, painted by their Scoutmaster, Mr. George Whittles, who was in charge of the party.”

The “Story of Scouting” Museum at Waddecar has had donated by his nephew a sea scout jumper & other Jamboree memorabilia that belonged to Robert Brookes (1921- 2003) of the 5th Morecambe Sea Scout Troop who was one of the Morecambe contingent (2nd from left, front row). In 1937 Robert lived at 106 Clarendon Road, Morecambe, later at 20 Scott Grove. He had been a pupil at West End County School. He was quite diminutive in stature, his height in 1937 4ft 9½ ins. (1.46m).

Vogelensang-Bloemendaal, Netherlands, 1937. A total of 28,750 Scouts from 54 countries. Daily displays in the arena. Girl Guides used the arena to welcome Lady Baden-Powell, World Chief Guide. The cleanest Jamboree yet: 120 showers and 650 water taps. 71 bridges over the canals that intersected the site. B-P was eighty years old. On presenting the Jamboree emblem, a Jacob staff, B-P said, “Now the time has come for me to say good-bye. I want you to lead happy lives. You know that many of us will never meet again in this world.”