To mark the occasion of the first anniversary of the founding of the Scout Group and Girl Guide Company associated with Cross Hill Congregational Church, an impressive service of dedication was held on Sunday evening. The Mayor and Mayoress of Lancaster (Coun. and Mrs, G. Chirnside) attended and a large congregation shared with Scouts, Cubs and Guides, in worship and thanksgiving.

Prior to the service the three units paraded in the Church grounds, and after flag-break, they were inspected by the Mayor and Mayoress, together with County Commissioner Mr. J. Dodds Drummond. Subsequently they formed a guard of honour for the Mayoral party.

The service was conducted by the Rev. Harold Clarke, Chaplain and Group Scoutmaster, and the County Commissioner gave the address. Miss Lythgoe (Guide Captain) read the lesson.

During the service, Mr. John Barker, who had very kindly given a new Union flag to the Troop and a new Cub flag to the Pack, said that it afforded him much pleasure to make the gifts, which he then presented to Scoutmaster Mr. L. White and Cubmaster Mr. A. Wilson. The Chaplain expressed thanks to the donor and the flags were dedicated. The National Anthem was sung.

Before the address the Chaplain recited the Guide, Scout and Cub laws after which the Promises were renewed by all present who had at any time been enrolled as members of the Scout and Guide movements.

County Commissioner J. Dodds Drummond, speaking particularly to the young people, illustrated his remarks in allegoric vein, using the text “He speaketh with His feet.” There were very special kinds of feet. They would recall that Jesus told the story of three men, two of whom passe by. These were the cowards, but the third man stopped and gave first-aid. It was easy sometimes to run away, but the Scout to whom he recently presented the Gilt Cross at Barrow, for rescuing a boy from a frozen lake, and the only holder of the Albert Medal for similar courage, who was a ten-year-old Sixer, were brave chaps who used their special kind of feet in a right way. The responsibility of those in charge of Scouts and Guides was to train the boys and girls to do the right thing. They all should take to heart those word of Joshua — “I am going to be very strong and very courageous” and if they asked Him, God would help them to carry out the Law and the Promise.

The County Commissioner said he hoped to come to next year’s birthday celebrtion and to find that they had stood firm. Perhaps by then the family would be complete with the addition of Brownies.

The colour parties led the recessional from the Church at the conclusion of the service, and before dismissal outside, the County Commissioner congratulated all ranks on the smartness of the parade and the good progress made in their first year.

On Saturday rain curtailed a sports’ meeting arranged in connection with the birthday celebrations and the event was transferred indoors. An excellent tea was provided by the Group Parents’ Committee, and games and an impromptu concert round the camp-fire whiled away a pleasant evening. 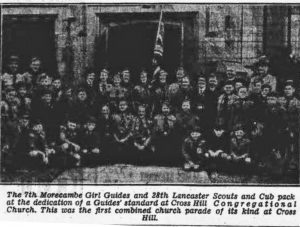 The Applehouse 4th Lancaster Rover Den will have been in use for 21 years before 1950 ends. The B.P. Guild of Old Scouts of this Group are to meet there on Sunday, when it is hoped, as many as possible will endeavour to attend, taking sandwiches for lunch and tea, Buses leave Damside Street at 9.35, 10.38 and 11.38 a.m. for Penny Bridge. — AKELA