THE Silver Acorn for distinguished service to Scouting was presented to Mr. Frank Hayton, Scoutmaster of the 13th Lancaster Boy Scout Group, at a celebration dinner in the Headway Hotel, Morecambe, on Saturday night.

The function was attended by Group Committee members, Scouters of the Group and officials of the Lancaster and District Boy Scouts Association. The award was presented to Mr. Hayton by Mr. J. Dodds Drummond. County Commissioner for North-West Lancashire, who was acting on behalf of Sir Charles Maclean, Chief Scout.

Mr. Drummond paid tribute to Mr. Hayton’s untiring and inspiring service and his ability in caring for several generations of boys. Mr. Hayton’s award was an honour to the County and it came with hopes for further inspiration and leadership in Scouting.

Replying, Mr. Hayton said that Mr. Drummond had been a tower of strength to him. Talking of the Group, he said they now needed a bigger and better headquarters. He treasured the spirit of brotherhood which existed among old members and Rovers of the Group.

District Commissioner Mr. George Miller praised the progress of the 13th Group under Mr, Hayton’s leadership, The award was well deserved, he said.

Mr and Mrs. Hayton were presented with a tea set from the Group Committee by Mr. Norman Edmondson, an ex-Rover Scout of the 13th Group.

The Frank R. Hayton trophy is a shield presented in his memory by the 13th Lancaster Scout Group and competed for annually by Scout Troops in the District. This was originally used for the First Aid Competition but latterly has been awarded to the winners of the Junior Hiking Competition. 2010. 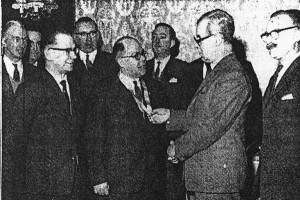 Mr. F. A. Hayton (centre), Scoutmaster of the 13th Lancaster Boy Scout Group receiving the Silver Acorn for distinguished service from Mr. J. Dodds Drummond, County Commissioner for N.W. Lancashire, at the Headway Hotel, Morecambe, on Saturday. Among others in picture is the District Commissioner Mr. G. Miller (left). 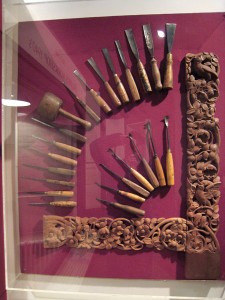 This section of a firescreen and woodworking tools belonged to Frank R. Hayton, who joined Waring & Gillow as an apprentice woodcarver in 1929. After having served his time he left the firm, the opportunities for woodcarving on furniture having been severely limited by the plain surfaces of the Art Deco style.

The firescreen, a section only of which is shown here, was started in 1930 but never completed. It is however particularly interesting in that it demonstrates the successive stages employed by woodcarvers at Waring & Gillows, from the preliminary drawing on the oak board (lower left and right) to virtual completion in the central part of the horizontal section.

The tools, which are a representative selection of those used by Mr Hayton, and which comprise various chisels and gauges, would be sufficient to execute the carving of the firescreen.

English oak is an ideal wood for the carver, being close in grain and very hard. In the hands of a skilful craftsman it takes on a beautiful surface much admired in medieval times.

Frank R. Hayton was among the last of a line of woodcarvers at Waring & Gillows who used tools and techniques which differed little from their counterparts of five or six hundred years ago. The tools have been kindly donated by his widow Phyllis Hayton who has also lent the sections of the firescreen.

With acknowledgement to the Judges’ Lodgings Museum