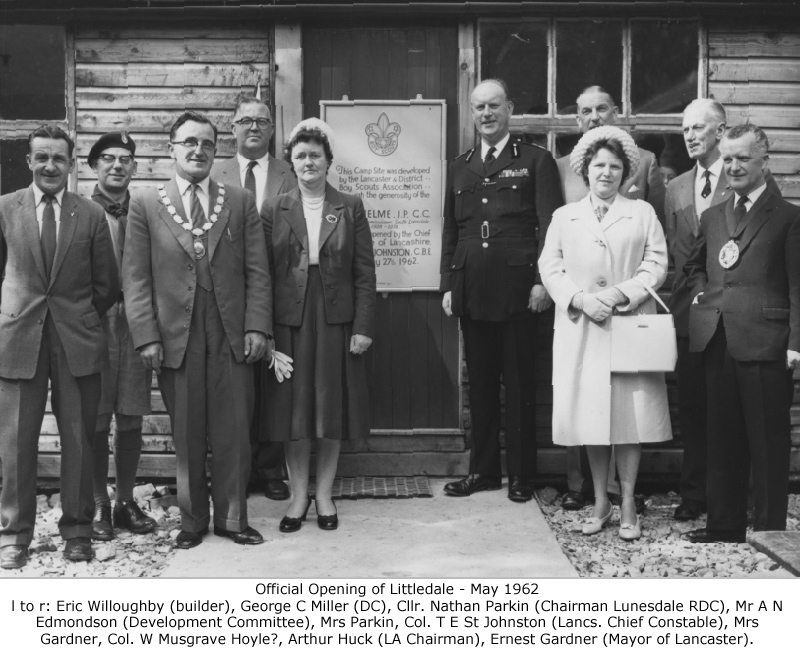 Memorial to former Commissioner – from his own legacy

HUNDREDS of Boy Scouts and Wolf Cubs, many of whom sought a vantage point on the natural grandstand of a well wooded slope carpeted with bluebells, watched the official opening of the T. W. Helme Memorial Camp Site in the picturesque Littledale valley on Sunday.

The ceremony attracted a crowd of about 2,000 people. There were scouts and cubs from every pack In Lancaster and district, many with their parents. Some scouts had camped at Littledale overnight and were at work early in the morning preparing for the arrival of the official visitors.

Among those who watched were some who were attached to the movement in Lancaster over 60 years ago and who had been associated in building up the strength and character of the Scouts and Rover Scouts with the late Mr. T. W. Helme to whose memory the 17½ -acre site was dedicated. The site has been bought by the Boy Scouts Association from a legacy left by Mr. Helme “to be applied for the permanent lasting use for the benefit of scouting in the area.”

It was, as Mr. Arthur Huck, Chairman of the Lancaster and District Scouts Association said “An exciting and memorable occasion -a day most of them would remember for the rest of their lives”.

It was for a number of scouts, parents and friends the end of three years strenuous preparation to convert the 17½ acres of lovely countryside into a beautiful well-equipped camping site.

The site, bounded by a picturesque babbling stream, which has been harnessed to improve the utility value of the camp, has a headquarters block, including shelter for campers in bad weather and at several points there are ideal camping sites claimed and developed by individual troops.

Special motor coaches took many of the visitors to Littledale and hundreds went by cars. Some cycled and there were even those who walked over the fells through Quernmore.

Mr. Huck, who traced the history of the acquisition of the site as a camping ground for Scouts said it was rather an accidental find. A number of men who had been detailed to find a camping ground got together in 1959, ready to go to Silverdale to view a site when one of them Mr. Maurice Sharpe produced a newspaper cutting of an impending sale of land at Littledale. The five visited the site when they returned from Silverdale although it was then dark; the District Commissioner (Hector Todd) attended the sale and the site was purchased. It was the sort of site, which they knew the late Tom Helme, had sought for during his life.

Commenting that it had taken three years to get the camp in its present state ready for use, Mr. Huck paid tribute to the members of the responsible committee.

Mr. A. N. Edmondson, chairman of the site management committee said not only had Mr. Helme been District Commissioner but was also Rover Leader of the 13th Lancasters, who had had their own private site in Littledale. As a former member of the 13th Rovers, he thought the establishment of a camping site was a particularly intimate memorial.

Mr. Edmondson pointed out that they had demolished an old corn mill on the site, but had preserved the shell of a huge barn so that there was a covered area available for camping, particularly for Cubs, during bad weather.  He explained that wash houses and toilets had been erected and water laid on from the adjoining stream.

The work, he said, was by no means finished. There were tasks ahead which would take years to complete, but the site was now in use and they were very proud of it, it was a memorial to a man to whom they owed so much. 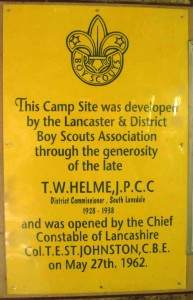 Col St. Johnston, who un-veiled a memorial plaque fixed to the main headquarters building, said he had visited camping sites in all parts of the country but he was prepared to take a bet that nowhere was there one as beautiful as the Littledale site.

He reminded the Scouts that the promise they made pledged that they should be men of integrity, honest men who were hard working at school, play, recreation and at whatever job they were called upon to do in life.

Emphasizing that there must be loyalty to family, troop, school and job, the Chief Constable said there was a spiritual background to scouting besides a material one and scouting taught tolerance. Even if they did not agree with another’s views they must be tolerant of them even though they might do their utmost to persuade people to do what they thought was right.

Scouting and Scout camping taught modesty and that it was the troop and not the individual that mattered. It installed a spirit of self-reliance and a determination to make do with what was around them and fend for themselves.

“But Scouting is not just being ‘Pi’ he declared. We have to have a sense of fun and camping can be excellent fun”.

“Commenting that a good Scout had integrity, self discipline, self reliance, tolerance and a sense of religious and spiritual values” Col. St. Johnston said it was not sufficient for a boy to be a good Scout only when he was in camp. He had to be a good Scout at work and at home and at all times when mixing with others.

They were told repeatedly, he continued, that young people were not much good and inscriptions found on ancient stones showed that the same things were being said of youth 2,000 and 3,000 years ago.

He maintained that the English were still a great people and had a great contribution to make to the world. That contribution would be made by the type of boys and girls produced by the Scouts and Guides movements.

Col. St. Johnston made a plea to Scouts not only to keep their own camp sites tidy but to set an example and do what they could to encourage people to keep lovely North Lancashire free from litter.

Dr. G. M, Kay, President of the Association thanking the Chief Constable paid tribute to the work the police did in Lancaster on behalf of youth and the support given to the organisations catering for, and supporting youth.

After assuring the Lunesdale R.D.C. chairman that the amenities of the area would be preserved, he expressed the gratitude of the committee and of all Scouts to the work done by Mr. Edmondson and his committee. The work, he said had not been done by bulldozers and mechanical diggers, but by picks, spades and crowbars and sweat and toil. Future generations of Boy Scouts would have need to be grateful for what had been done in preparing such a magnificent site.

Mr. George Miller, District Commissioner said the opening of the site was the most significant event in the history of Scouting in South Lonsdale. After thanking the many distinguished people who had attended and given their support he paid tribute to Mr. Tom Helme whose generosity had made it all possible.

The true memorial to Tom Helme, he said, was not the camping site in the valley but in the lives of the boys in whom he showed such interest. The camping site was both a link with the past and an inspiration for the future.

Prayers were said by the Rev. R.W. Hurst-Entwistle, Vicar of Brookhouse.

Act 2. Scene 1. Two emergency meetings – some evidence of schizophrenia!! (One at Sulyard Street and one on a distant beach!) Executives separately approve purchase of Lot 2., 16.7 acres of woodland including two buildings.

A map of the site is attached herewith. Click here

Mr. Helme, affectionately known as L.P., bequeathed to the Local Association, a sum to be spent on the establishment of a camp site for our District. Many years have been spent in finding a suitable site, but until last month nothing was found which was considered to be fitting to his memory. The ‘spirit’ of L.P. must always be associated with Littledale and that is why everyone who had the priviledge (sic) of knowing him must be more than delighted with the present development.”

Although the system by which the Camp site will be run has yet to be finally decided, it is hoped that the threads will be knotted together by the end of January. A map of the site has already been printed in this magazine and below, in the hope that it will provoke a few constructive criticisms and ideas, are the measurements of the Mill.

The walls are, on an average, 2 feet thick and so please do not suggest moving them! The ideas of what Troops or individuals would most like to see will be most welcome either for the actual building itself or for the site as a whole.

The site will provide many opportunities for service if it is to be ready for camping by Whitsuntide and afterwards, the development and maintenance will keep many people busy.

The Committee were unable to complete their report for the Executive held in February and are still hard at work on the various schemes that are practicable with the capital which will be available now that the Helme Bequest Committee etc., has agreed that Morecambe and Lancaster should divide the money in the ratio of their scout population, i.e. 1:2

At the last meeting the members learned to their regret that the Mill is considered to be unsafe: it would, in any case, have taken a large amount of money to put it in order.

Without waiting for the report there are several jobs which can be started on and so any Scouters and Senior Scouts who would like to form working parties are urged to contact Mr. J. S. Clarke for the following dates:-

Sundays April 10th and 24th commencing at 10 a.m. each day. On the first of these Sundays the party will beat the bounds to acquaint everyone with the extent of our land (Possibly also on the second Sunday).

Bring your own victua;s. (sic)

In order to accomplish the best results please let me know in advance if at all possible. 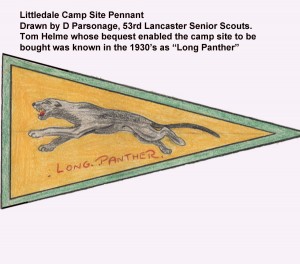