THE CITY SHIELD
The Mayor presented to Dr. J. A. Tomb, chairman of the Association, the City Shield, provided by the Corporation in connection with City celebrations, and to a number of King Scouts roll of honour certificates.

Badge Secretary J. W. Ellwood reported an increased number of proficiency badges awarded during the year – 233, as against 184 last year. A Debater’s, a Miner’s and a World Friendship badge had been awarded for the first time in Lancaster.

The annual census in September revealed, it was stated only a slight decrease in the number of Scouts, compared with last year.

During the year there had been the addition of one troop – the 23rd. Lancaster (Christ Church).

Presenting the accounts, the treasurer (Mr. J. D. Swainson), announced that a boat had been obtained for the Sea Scouts at the modest price of £10. There was a balance in hand of £114, compared with £118 at the beginning of the year. It was an excellent result when it was known that a contribution of £37 10s. had been made towards the expenses of the Holland Jamboree.

Lancaster Guardian 25 November 1938:-
(report includes)
The Mayoress then presented the Lancaster City Shield to the captain of the 20th Lancaster Troop.  This Shield was presented by the Corporation to mark the raising of the town to City status.  A committee was formed, and it was decided the Shield should be awarded on the Log Books.

Lancaster Guardian 02 June 1939:-
(Scouting Notes – report includes)
CITY SHIELD COMPETITION.
Scoutmaster Frank Hayton put forth an excellent suggestion that this year’s competition for the City Shield should be based on camping standards.  After we had talked it over, the suggestion took concrete form when it was decided troops should send one patrol, of a minimum of five boys to a patrol, to camp for 24 hours on a communal site on September 16th.  District Commissioner J. Dodds Drummond, District Scoutmasters Tyson and Sharpe, and Scoutmaster Hayton were appointed to make the necessary arrangements and decide the standards of campcraft on which the competition will be based.  Judging will be in the hands of Scouters not connected with our Association.

Lancaster Guardian 01 September 1939:-
(Scouting Notes – report includes)
Mr. Sharpe tells me that the City Shield Patrol Camp will be at Ashton Hall during the weekend of the 16th – 17th September and he would like to be advised by September 6th, of all troops taking part.  He also wants to know which troops will be attending at Bailrigg on September 16th, for the sports meeting etc.,  and fixes September 9th, as the date of notification.

Lancaster Guardian 15 September 1939:-
(Scouting Notes – report includes)
Cancellations include the City Shield camping competition this weekend, for which an alternative scheme is being planned, and the Swimming events on September 23rd and 30th.  Troops with life-saving entries, however, should consult Mr. Adam’s statement on the notice-board.

Lancaster Guardian 29 September 1939:-
(Scouting Notes – report includes)
The City Shield competition this year is to take the form of a patrol hike.  This must be undertaken between the period, October 1st to 15th, and the record of the journey sent to the adjudicator, Mr. L. H. Slater, 44, Regent Street, Lancaster, by October 16th.  Entry is confined to one recognized patrol of five boys per troop, The minimum distance to be covered is seven miles, and it is requested that the route exclude Heysham, Halton, and the City itself.

Morecambe Guardian 13 July 1940:-
(Scouting Notes – report includes)
The 13th Lancaster troop were the winners of the City Shield competition which this year was based on camping standards, during a weekend camp on June 29–30.  The 13th had an award of 49 points with the 20th Lancaster (Friends’) running them very close with 47.  The Deputy Camp Chief for the County, Mr. J. F. Leach, was the adjudicator.

THE 13th Lancaster Scout Group won the coveted City Shield in a competition for scouts and cubs of the Lancaster and District Scouts Association held at the district camp site at Littledale over the week-end.

The Scout Troop won the Patrol Challenge Cup for scout training and testwork and also the Senior Scout Bronze Statuette. With the Cubs having been placed second in the Cub event on Saturday, the troop were awarded the City Shield for the highest aggregate points.

The Scout trophies were presented by Mr. R. E. Wright, an honorary commissioner, of Bolton-le-Sands.

The District Commissioner, Mr. G. C. Miller, awarded pennants to all eight Cub packs and to the eight Scout troops as a reward for achieving the high standard set by the organising team. Two Scouters, Ron Chattington and Tony Guy of Blackpool, led a very enjoyable camp fire,

The Rev. R, W. Hurst Entwistle, Vicar of Caton, officiated at the Scouts own service at Littledale Church on Sunday morning. 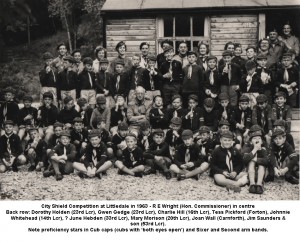