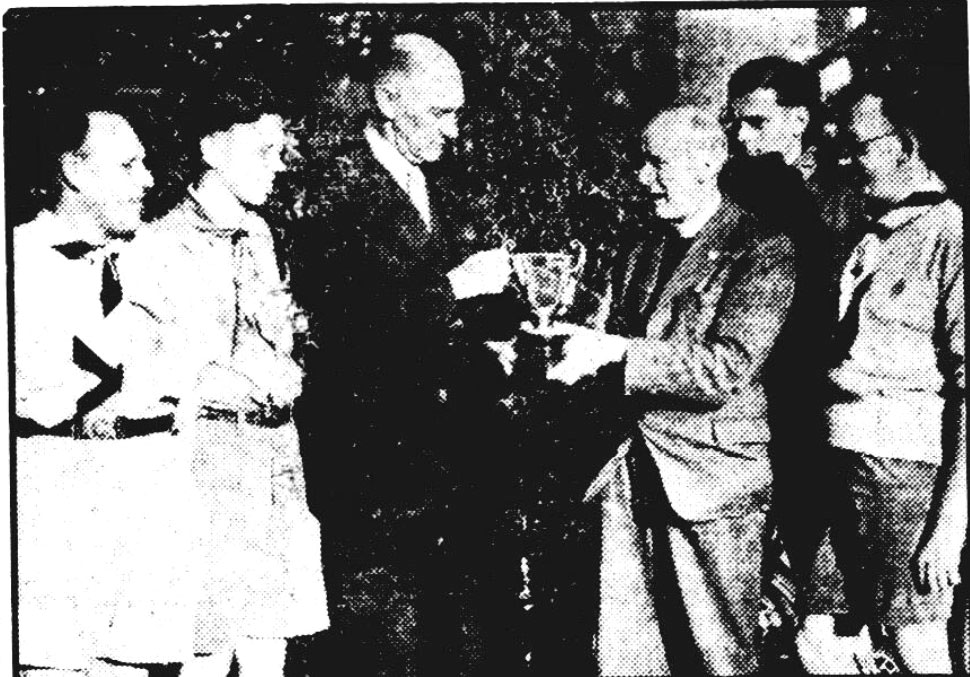 ALDERMAN T.W. HELME, County Commissioner, receiving from the Vicar of Scorton the Scorton Challenge Cup, which was awarded to the 3rd Blackpool St. Mark’s Troop with the best and most efficient camping standard, at the Scouts’ cycle rally on Saturday. Left to right: Scoutmasters F. Shufflebottom and J. Seed, Mr. Helme, the Rev. E. Jackson and Scoutmasters T. Riordan and W. Fazackerley. – Photo: “The Lancashire Daily Post.”

The Scorton Challenge Cup for the best camp site was won by the 3rd Blackpool St. Mark’s Troop with the 1st Broughton as runners up. The cup, which was given by the villagers for annual competition, was presented to Troop Leader George Roberts, by County Commissioner T. W. Helme, of Lancaster.

In handing the trophy to the County Commissioner at a Scout concert in the Scorton Public Hall on Saturday night, the Vicar of Scorton (Rev. Edwin Jackson) said they had welcomed the Scouts to the village for many years and the cup was a token of the villagers’ appreciation. He paid a tribute to the late Mr. Allan Sharpe, district Scout Master of Lancaster who inaugurated the first rally.

On Sunday morning there were church parades to Scorton Parish Church and Scorton R.C. Church for services by the Rev. E. Jackson and the Rev. Fr. Bibby.

Amomg those taking part were Dr. Tomb, chairman of the Lancaster Boy Scouts Association and Mr. J. K. Booth, chairman of the Garstang association. The sports programme had to be abandoned because of the weather.

The rally was organised by Messrs. J. Dodds Drummond, District Commissioner for South Lonsdale who expressed satisfaction with the high standard of camping and thanked Mr. R. Thompson, of Clifton’s Farm, for use of the site. Mr. J. Seed acting Scoutmaster (Preston) the various commissioners and others.