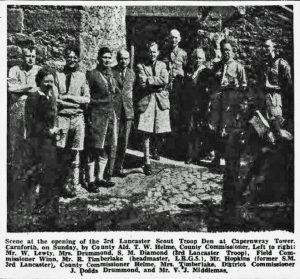 Three years of work by the Lancaster Royal Grammar School (School House) Troop on a roofless, floorless, windowless stone tower at Capernwray, was finally crowned with success when, on Sunday, their Scout Den was opened by County Alderman T. W. Helme.

There were also present: Field Commissioner Winn, Mr. Timberlake, Mr. Hopkins, former S.M. of the Troop and now headmaster of Gainsborough Grammar School, and District Commissioner J. Dodds Drummond. The 3rd Lancaster troop arrived in force, together with a contingent from Carnforth.

The County Commissioner declared the building open to a resounding “Bravo”. and  District Commissioner Drummond presented S.M. Dimond with his Warrant as Scoutmaster of the Troop.

The party afterwards entered the Tower, signed their names in the Log Book and examined the building, which contains living, bunk, tent storage, and general equipment rooms.

The afternoon concluded with a Wide Game, a mutual flag raid between the “Flatfeet” and “Mohawks” captained respectively by Commissioner Winn and Mr. Hopkins.

* I’m fairly sure that the photos I took below on 31.12.2017 relate to the tower in question. This is the Gamekeeper’s Tower at Capernwray marked as such on the OS map. Perhaps someone out there knows for definite . .
ASH

The following Cubs of the 21st Lancaster Pack have successfully passed the test for the Athlete’s badge: D. Humpage, D. Casson, C. and D. Norbury, H. Akister, C. Holmes, A. Norbury, I. Beatty, A. Williamson, W. Batty and M. Corless.

http://jimjarratt.co.uk/follies/page15.html
“Capernwray – The Gamekeeper’s Tower.
Map Ref.:SD 542 714 The nineteenth century gothic tower near Capernwray Hall is in a ruinous condition and needs to be saved before it is too late. Access to it involves locating a decayed and rarely-used footpath, which leads up the hillside from the nearby Hobsons Caravan Park. The walk is a pleasant stroll with nearby woodlands and a possible chance of sighting red deer. It is not, however, a substantial enough walk to merit a full chapter in this book. You could perhaps take it in en route to the Pepperpot which lies not too far distant at Silverdale. Little is known about the Capernwray Tower. It belonged of course, to the estate of nearby Capernwray Hall, being built by Mr George Marton (the builder of the present Capernwray Hall) as a lookout tower and a residence for his head gamekeeper. The tower is a listed building, and prior to its present ruinous condition was used by the the Boy Scouts. In 1979 it was reported at a parish council meeting that the tower had been vandalised, and its state has progressively worsened since. According to the local farmer the tower is still frequented by vandals, which seems surprising, considering the remote location of the place. Successive Martons lived at Capernwray Hall until death duties forced them to sell the house in 1946 for the princely sum of £7,350. Today the hall is a young people’s Christian holiday conference centre.”

The Tower was obviously being lived in in 1927 as a Morecambe Guardian article dated  05 November 1927, in relation to an inquest on 3 persons drowned by flooding at the Luneside Sanatorium, records “Evidence of identification (on Joseph Gregg) was given by his sister Mrs. Haddow of The Tower, Capernwray.”