With Troop, Pack and Crew. 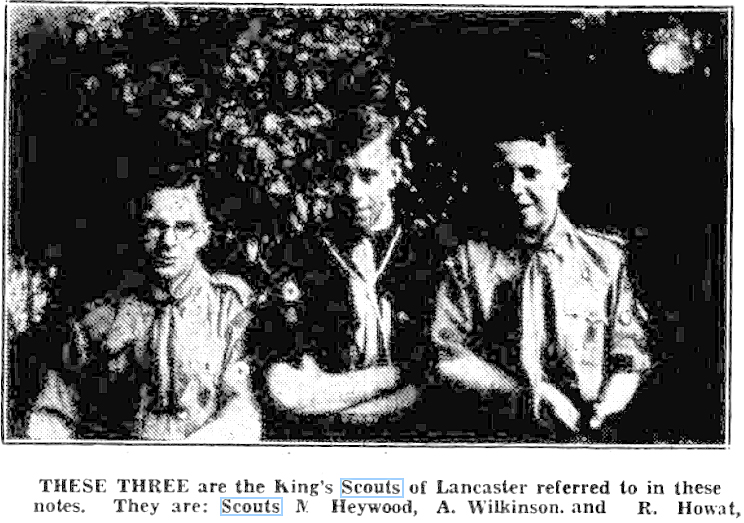 The three King’s Scouts, Troop Leader A. Wilkinson (16th), Patrol Leader N. Heywood, and Second R. Howat (13th), who were in London during the weekend, on the occasion of the National Scout Service at Windsor, are home again, delighted with their experience. Joining the Barrow contingent at Lancaster, they had an enthusiastic send-off on the 10.10 p.m. train on Saturday.

Here is their story: –
“We were very pleased with the hearty shout of ‘Bravo!’ from our friends, as the train steamed out of Lancaster station. It was a good beginning, and we were cheered for the journey. London was reached at 5 a.m. After breakfast, we were privileged to see the Coronation procession rehearsal from Trafalgar Square. Our sightseeing included Whitehall, Westminster Abbey, Buckingham Palace, No.10 Downing Street, and St. James’ Palace, for the changing of the guard. We entrained at 1.45 p.m. at Paddington for Windsor. The thousand Scouts marched in 4 rows through Windsor to St. George’s Chapel. The afternoon was bright and sunny, and large crowds lined the route to the chapel. Here in the Main Quadrangle of the castle we marched past the King and Queen, the little Princesses, other members of the Royal family, and the Chief Scout and Guide, cheering loudly. The service followed, at which the Deputy Chief Scout, Lord Somers, recited the Scout Law and the Promise was renewed.

Later, assembled on the lawn in the cloisters, the Chief Scout and the Archbishop of Canterbury addressed the Scouts. Hearty cheers for the King and the Chief Scout ended the memorable service. During an inspection of the chapel, we saw the great sword of Edward the Third, who founded the chapel. It needs two hands to lift it. Together with the sword is his helmet of bronze. We also saw the stalls were the Royal Family sit. Tea was provided in Windsor, supper in London, and Lancaster was reached at 4 a.m. on Monday.”

The Scouts tell me their trip was well worth while. Like Oliver Twist, they feel like pushing forward their plates and asking for more! Alas, not till next year.

Norman Dennison Heywood b. 1921 was a son of John Thomas Heywood and Florence Elizabeth née Dennison. In 1939 they were living at 13 Belle Vue Terrace, Lancaster.

Alan James Graham Wilkinson b. 14.7.1918 was a son of James Clark and Olive Ada Wilkinson née Graham. In 1939 they were living at 7 Malvern Avenue, Lancaster. Alan was then a Draughtsman Electrical. Alan died 18.9.1971 at Greenhollow, Levens.

The 23rd Lancaster (Christ Church) spent another pleasant Saturday afternoon last week in the wood at Langthwaite. One or two Scouts passed their second class cooking and fire lighting tests. “Cowboys and Indians” was an interesting diversion, and although many scratched knees and arms resulted, all went home happy (and “sticky”).

On Monday evening, Allan Steel, Jack Middleton, and Leslie Aldren were invested as Tenderfoot Scouts, this bringing the total now invested to eight, and progress generally is very satisfactory. A welcome visitor during Monday’s ceremony was ADC R. E. Wright.

There was an investiture, too, on Monday, at the 13th Lancaster Rover Crew’s headquarters, Church Street, when RSL S. A. Neate duly invested Herbert Pyke as a Rover Scout. For three months before investiture, a Rover-elect serves as a Rover Squire to prove himself. He must have a thorough knowledge of Scouting and carry out service for others. Incidentally, Pyke is doing good work as the Assistant Scoutmaster of the 13th Scout Troop. District Commissioner T. W. Helme attended the investiture.

The Commissioner also paid a surprise visit to the 6th Lancaster (1st Greaves), on Monday. Here another of those happy joint meetings was held. The visitors were the Salvation Army Life-Saving Scouts. Though not attached to our movement, the Scouts carry out the same tests, the differences being in saluting and investiture. Mr. J. Wheeldon, there leader is very keen, and has nine Scouts.

Scoutmaster W. R. Hodgson, of the 6th made their visitors welcome and patrol work was demonstrated. Games followed. The Commissioner spoke to the Scouts about the example of St. George, and how everyone can be a knight errant by carrying out the true spirit of Scouting at all times.

The monthly award of the Silver Cat for the best performance was won by the Owl patrol. Service stars were presented to Scouts R. Newby, R. Bowker and M. Coulthwaite (2 years); Patrol-leaders K and F. Ferrington (3 years), and Troop Leader T. Hodgson (6 years). Accommodated in the basement at Greaves Wesleyan Church, the Troop are making their room comfortable and “scouty” and are very enthusiastic in their work. The Assistant Scoutmaster is Mr. A. Corless.

We shall soon be putting the “out” into our Scouting. Please reserve the 29th May for the next district wide game. Full particulars later in this column and on the noticeboard.