COMPETING for the Commissioner’s Cup – a trophy presented to the Association by Major Nigel Kennedy when he was County Commissioner some years ago – Wolf Cubs gave a very good account of themselves athleticly last Saturday.

The competition took the form of a sports day, and apart from a brief shower, rain kept off, enabling the programme to be completed under ideal conditions.

Bailrigg staged the event. We are indeed fortunate in that our President, Sir James Travis Clegg, invites us to make use of the big field there from time to time. He was present on Saturday for a while and kindly provided refreshments.  He has since intimated that as this was purely a Wolf Cub function, he would be glad to welcome the Scout troops at a later date.

No individual prizes were given, the final result being awarded on the total points gained per Pack.

Competition was keen, and of the events, the high and long jumps in particular brought forward some excellent efforts, whilst the tug-of-war was exciting. Over-anxiety in the wheelbarrow race caused many to come to grief.

At the conclusion, with all the Cubs forming a big Parade Circle, A.D.S  R. E. Wright thanked Sir James for his hospitality, and the Cubs voiced a characteristic “One, two, three, Wolf.”

Mr. J. W. Ellwood then declared the result which gave the 4th Morecambe and Heysham pack (14) the cup by the narrow margin of two points over the 23rd Lancaster Christ church (12), with the 6th Lancaster Greaves Wesleyan and the 1st Carnforth Packs third, with eight points each.

Pack-Leader Peter Morphet received the cup from the ADC on behalf of his Pack, and then led the final Grand Howl.

The singing of the National Anthem and prayers said by the Rev. H. Hardman, brought an enjoyable day to a close.

Cubmasters Kay, Manning, Whittle and Sharpe were the organisers and they had the willing corporation of other Scouters present.  An interested visitor, now resident in Manchester, was Mr. T. H. S. Marshall, once District Cubmaster and Scoutmaster of the 7th Lancaster and later ADC Totnes.

The 1st Carnforth Rover Crew spent a very enjoyable week-end camp at the New England Quarry, by kind permission of Mr. Marten*, when the usual camping activities were indulged in. Amongst those present were Rovers K. Keenan, A. Atkinson, I. Howarth, A. Mawson, W. Howie, M. J. Whalan, S. T. Whalan, and W. Wildman. Borwick Church was visited on the Sunday morning by most of the Rovers present, and it was with real regret that the camp had to be broken up on the Monday morning.

“COUNTRY DEN.”
The Rovers are busy clearing a site in the New England Quarry at Capernwray, kindly given by Mr. Marten, for the purpose of erecting a “country den” for the Carnforth Crew.

(Now the site of the New England Caravan Park. The site was originally a limestone quarry, quarried by the old Wigan Coal and Iron Company from 1793 to 1913.) 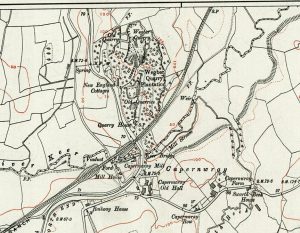 Ordnance Survey 1916
WOLF CUBS.
The cup given for the best patrol in the 1st Carnforth Wolf Cub Pack was won by the patrol under the control of Sixer Frank Birtle, for the ensuing three months.

SCOUTS AT CHURCH.
The Patrol Leaders, under Scoutmaster D. Beaumont, spent a weekend at New England by kind permission of Mr. Marten. The Scouts attended Silverdale Parish Church in the morning, and went to Sedbergh in the evening for reconnoitring purposes.

Four members of 1st Carnforth Scout Group enjoyed a week-end out at their den during the Easter holidays. Their activities included a hike along the River Keer from Capernwray to the source and two night hikes. On Wednesday of last week, three members of the Troop explored as far as possible the Dunald Mill Hole near Kellett. Storth.

Is this den the same one mentioned above?