The annual meeting of the Lancaster Boy Scouts’ Association was held last evening, under the chairman-ship of Mr. T. W. Helme.

The secretaries (Messrs. C. Hodgson and R. E. Wright) reported that there were 324 of all ranks, a decrease of 78, due to the fact that the 2nd (Skerton). the 4th (Morecambe), and the Caton troops had not re- registered.

During the year the 1st (Galgate) troop had been registered, and new troops were in process of formation at Morecambe and Caton. Warton had recently registered a wolf cub pack and a rover patrol. The rover section, for scouts over 17½  years of age, had not made much progress, but it was felt that with capable  instructors, and some definite ideas to work on, the branch would grow. Eight cubs had been promoted to scouts, and more interest would be taken if there were more packs to compete with. Badge work had been fairly good. The Scouts’ evening classes had not been reopened owing to the education authority cutting down expenditure.

The association had decided to offer two shields for sport. The 5th (Lancaster) troop had gained the shield for general sport, and the other shield was offered for a football competition, which was now in progress. On account of expence they had decided to terminate the tenancy of present headquarters.

The balance sheet showed a balance in hand of £11 2s., the improved position being mainly due to the efforts of the Scouts themselves.

In 1911 the family is living at ‘Netherleigh’, Lancaster where the father is recorded as Manufacturer of Table Baize & Leathercloth. 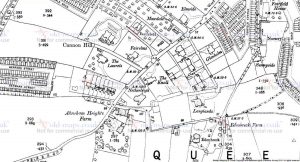 1920 Passenger Lists Leaving UK  Sydney, New South Wales, Australia: Records show that Robert sailed for Australia on the ship “Ulysses” (Blue Funnel Line) on 12 September 1920. And again on 25 September 1926 from Liverpool, 1st class, on board the same ship bound for Cape Town. His address in the UK is recorded as The Ridding, Lower Bentham. On that occasion he travelled with his wife Gladys Leonora (nee Roskill, married 1915 in Kent) and sons Peter Egerton Helme (10), David Charles Helme (5) and Nigel Bingham Helme (11).

An attendance of more than 1,100 came from a wide area, including parties from Skipton, Chorley, and Preston.

The event was under the presidency of Mr. W. J. Garnett.

In 1939 Leo had moved to 11 Hartley Street, Ulverston and was living with his wife Helen nee Harrison (married 1927). He was recorded as an Omnibus Ticket Inspector and Depot Traffic Supervisor.