Smiling bravely, 14-year-old Patrol-Leader Stanley Baxter of the 1st Morecambe troop, stood before County Commissioner Mr T.W. Helme at the annual meeting of the Morecambe & Heysham Boy Scout Association on Monday night to receive the most coveted honour in the scouting world – The Cornwall (sic) Scout Decoration for bravery and endurance during illness.”

So rare is the honour that it is known as the VC of the scouting world.

For two and a half years he has suffered pain, undergone operations, and had to be wheeled about in an invalid chair, but such was his cheerfulness and fortitude that he earned for himself the name of “The Smiling Scout.”

To commemorate the occasion, after Mr T.W. Helme had made the presentation, Baxter presented him with a signed photo of himself standing outside his home on crutches. Mr Helme congratulated Baxter and said that it was the first time in North West Lancashire that they had received a Cornwall award.

The Mayor (Coun R.W. Williams) who presided, said he could well remember the scouts movement starting. After Baden Powell’s work in South Africa everybody thought that he had done enough. But Baden Powell did not. The Boy Scouts movement was a brotherhood which made people understand that the object of living was to serve others. The Girl Guide movement supplemented the work commenced by Baden Powell.

Stanley was the son of William Baxter and Florence West. In 1939 the family was living at 29 Dallam Avenue, Morecambe. William is listed as an Inshore Fisherman. Sadly, Stanley died in 1941 aged 17.

The secretary (Mr. G.S. Evenden) presented his report and said that the number of Scouts and Scouters in the district showed a satisfactory increase, there being now 29 Scouters and 219 scouts, Rovers and Wolf Cubs making a total of 248, compared with 214 last year. “During the year one more troop has been registered”, he said. “It was the 2nd Morecambe & Heysham making now 8 groups or troops in this Association.”

He urged that greater interest be taken in the lay members. The outstanding feature of the year was the boy scouts national appeal and although Morecambe Scouts confined their efforts to one week. They gave £21 19s 6d to the National Fund.

Confidence in the advance of scouting was expressed by the Badge Secretary Mr A.W.J. Antenen who said “In consideration of the 75 tenderfoot and 31 tenderpad badges that have been issued I am confident of a greater demand for proficiency badges during the next year.”

During the past year 28 Ambulance, 20 cyclist, 24 pathfinder and 22 Swimmer badges have been issued.

“The Groups which have been most outstanding are 4th Morecambe & Heysham Scouts and Sea Scouts. Two King’s Scout, 2 Green & Yellow Cords, 3 First Class and 63 proficiency badges, including 7 interpreter badges. He offered special congratulations to the scouts who had been awarded the interpreter badges.

He drew attention to the unlimited possibilities at the disposal of the scouts in the needs of National Service particularly in relation to ARP work. “During the war scouts at home were able to serve the country in a variety of ways” he said. ” And today we should be no less prepared to do the same and in the future”.

Mr T.W. Helme introduced the new district commissioner (James Dodds Drummond) and said that the district had got a good man.

MUST DO SOMETHING FOR PEACE

“I am perfectly certain all the countries of the world urgently desire peace, but if we want peace we must do something for it. If you can spread the scouts idea it will spread throughout the world in general.”

“Most of them professed Christian faith. It was their ideal and they ought to try and build scouting on those lines. In the totalitarian states scouting is crushed because the rules there do not believe in a movement which help boys to think for themselves. That is not wanted there.”

“We must make scouting move with the times. Nothing remains static, though I don’t want you to get away from the basic principles” he said.

He urged them to learn as much as they could so as best to serve the country. Headquarters have recently sent out a request to all troops to supply information as to what scouts would be able to do during a time of crisis if it ever arose. We should be prepared to show what we can do if another crisis does arise. He urged that Scouters should fit themselves to take over the work of their superiors if they happened to be called to war.

Mr J.D. Drummond, the recently appointed district commissioner, gave a lighthearted speech though with a deep vein of truth lying behind his humour.

“There is something about scouting which does not flourish in totalitarian states as it flourishes in democracies which we all love and which we want to keep”, he said. ” Mass hysteria and mob violence such as we have seen over the water in the past week would be made almost impossible if the people of the world followed the idea of scouting.”

Asked by Mr Helme at the conclusion of the meeting of (sic) he would care to become a scout, the Mayor (Coun. R. W. Williams) replied “on one condition”. “As long as you don’t make me walk in shorts to my civic duties”. Mr Helme assured him, amidst laughter, that there was no danger of that and the Mayor was initiated into the boy scout movement.

A vote of thanks was passed  to the Mayor by Mr Helme and Mr P. Hughes. 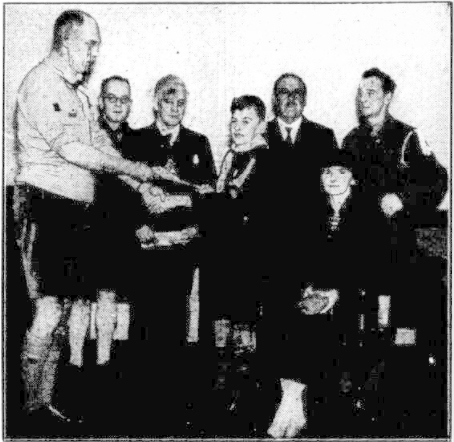 Miss Mawson, of the 7th Lancaster pack is now much better in health. She received the Cubmasters at her residence, “Applegarth” Hest Bank yesterday week, on the occasion of the monthly meeting, which took the form of a discussion on various aspects of Cubbing. Enthusiasm was shown for a District Training Course. An endeavour will be made to operate this in February next. The December meeting will be on the 8th; time and place will be given later.

Note:
Applegarth, Hest Bank Lane, Hest Bank
This is the house that Thomas Mawson (1861-1933) built for himself. He was a landscape gardener who was part of the Arts and Crafts movement in architecture, often described as ‘the leading landscape architect of the Edwardian era’. The above lady, Millicent, was one of Thomas’s five daughters.

Stanley Baxter received his ” V.C.” the Cornwall (sic) Scout award for Courage from County Commissioner T. W Helme at the Morecambe and Heysham annual meeting on Monday. Aged 14 Stanley is Patrol-leader of the 1st. Morecambe and Heysham Group, and as previously mentioned in our notes, has suffered for two years from severe blood poisoning arising from an injury to the bone in the leg. This has necessitated one major and fifteen minor operations. He has borne his pain bravely and cheerfully, continuing to work hard at his Scout tests, with the result that he is almost a First Class Scout. Stanley was not taking all the stage to himself on Monday. He had a surprise in store -a little presentation of his own. He had been photographed in uniform, and he presented the Commissioner with a framed photograph of himself, suitably inscribed, as a memento of the occasion – a gift that delighted the recipient.

A call on the 20th Lancaster (Friends’) Troop the other evening found the Scouts doing good work. There are 33 Scouts in this troop, which has made steady headway since its formation five years ago. It fortunately has an excellent “Skipper” in our new District-Commissioner, Mr. J. Dodds Drummond, capably assisted by Scoutmasters, Peters, Johnson, Hammond and Parish. The 20th, believe too, in putting the “out” into their Scouting for it is their custom to be out-of-doors on alternate Saturday afternoons; recent excursions having been a Treasure Hunt and Bean Trail.

Mr. R, H. Simpson, who for many years acted as examiner for the Fireman’s badge is leaving Lancaster, and has received the thanks of the Scoutmasters’ meeting for his help to our boys.

A glance at the new Policy, Organisation and Rules, 1938 edition, reveals several amendments and new regulations, affecting all groups. It is not possible to deal with these in this column . “P.O.R.” has solved many a knotty problem and Scoutmasters should study the new, edition carefully. These rules will be in force for the next five years, So far as tests are concerned, where a Scout has already started passing a test under the old rules, he can continue to do so and qualify for the badge up to April 1939.

Friends of the movement are cordially invited to the annual meeting in the Mayor’s Parlour, on Tuesday next, November 22nd; at 7.30 pm. The Mayor (Coun. Mrs. H.L. Musgrave-Hoyle) will preside.