That the Scout Movement is perhaps the best youth movement in the country or anywhere else in the world, was the opinion expressed by the Mayor of Lancaster, Coun. A. H. Robertson, when, on Friday night he presided over the annual meeting of the Lancaster and District Boy Scouts’ Association in the Banqueting Chamber of the Town Hall. 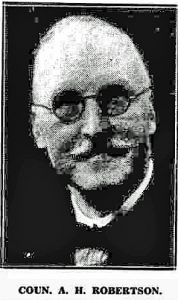 The Mayor was officiating as Chairman for the Scouts for a second time  within a week of his election, and because of his previous initiation as a Scout he was able to address the gathering on Friday night as “fellow Scouters.” Accompanying on the platform were Ald. T. W. Helme, County Commissioner; Mr. J. Dodds Drummond, District Commissioner; Dr. J. A. Tomb, Chairman of the Executive of the Association; and Mr. F. H. Capstick, hon. secretary.

Coun. Robertson said, “I look upon the Scout movement as perhaps the best youth movement we have in this country or anywhere else in the world, and I think if it could be spread in the right way, all over the world, including Germany, it would have an enormous influence for good. We have seen in Germany how youth can be led astray. They have instilled into the minds of the German youth the most pernicious doctrines any youth could be taught. Compare that with the high ideals  and the splendid teaching  that youth in the Scout movement gets. The former is against all ideas of fair play, honesty, and ordinary Christian morality: the Boy Scout movement on the other hand, teaches everything that is high and elevating. I hope that you younger lads will keep on with the movement. I am afraid that in youth movements boys join at an early age and after a few years  attendance drop off. I don’t know if that applies in the Scout movement, I hope it doesn’t. I would appeal to all you young ones here to keep in the movement until you are all King’s Scouts. It will benefit you enormously in your future life.”

In the course of the evening the Mayor presented the City Shield, given by the Corporation, to 3rd (R.G.S.) Lancaster Troop, and the Adams Cup for Life Saving to the same troop. Mr. J. Dodds Drummond presented the King’s Scout Certificate to Maurice Lowther, 1st Carnforth Troop.

ONE OF THE BEST YEARS

Presenting the thirty-third annual report of the Association, the hon. secretary said despite the trials of war, and the calling up of many of the seniors, the past year had been one of the best scouting years in the district for many years. A few more Scouters had been called up and those who still remained  were doing two men’s jobs. No Troops had had to be disbanded and some, he was pleased to report,  were flourishing more than ever. One new Troop had been started at Ryelands, Skerton. They welcomed a distinguished new Scout in the Mayor. Thanks were extended to Messrs. Storey Bros. for their continued kindness in placing Crosslands at the Association’s disposal; it was a real headquarters, factory, power-house and quarter-master’s store. He mentioned that many Troops had raised contributions for the Baden Powell Memorial Fund, with the 20th Troop raising nearly £13 for the invalid Children’s Aid Association. The Youth Advisory Committee had stimulated the Association into unwonted (sic) activity in many directions.

Mr. Capstick congratulated the 21st Lancaster Troop (Congregational Bowerham & Sea Scouts) on winning both the athletic and swimming sports and the 3rd (R.G.S.) Lancaster Troop on winning the City Shield and the Adams Life Saving Cup, and for their hospitality on several occasions. He referred with regret to the loss sustained by the Association through the death of the President, Sir James T. Travis-Clegg, whose keen and active interest in the movement locally, and whose lavish hospitality at Bailrigg would long be remembered. Tests for the City Shield competition disclosed that the Scouts’ knowledge of First Aid was of a very high order and should there be a “blitz” he was confident that they would rise magnificently to the occasion. Good work had been done in association with the Billeting Officer’s requirments for possible post-blitz conditions.

Seconding the adoption of the report, Mr. J. Dodds Drummond mentioned the good service which was being performed by members of the Sea Scouts at the Royal Lancaster Infirmary.

The Hon. Treasurer, Mr. J. G. Swainson, referred with regret to the losses sustained by the Association through the deaths of Sir James T. Travis-Clegg and Lady Helme. With regard to the general account the Association commenced the year with a balance of £48 5s. 4d. and ended with a balance of £60 9s. 6d. The Badge Account showed a credit balance of £1 10s 9d.; handicapped Scouts Account £6 12s. 10d., and the South Lonsdale Scouts Training Fund £20 0s. 3d.

The Swimming Report, presented by Mr. F.G.T. Adams* showed that interest had been maintained. He mentioned that the swimming championship shield had been won by 21st Lancaster, and the individual championship by R. Pemberton of that Troop. The life-saving cup had gone to the 3rd Lancaster. After meeting expenses there was a balance of £1 6s. for the Baden Powell Memorial Fund. Thanks were accorded to Miss Shipley for her help.

Mr. G. Penny, presenting the report of the Badge Secretary, said there had been 268 proficiency badges, of which 165 were qualifying for King’s Scout, against 359 and 205 respectively in the previous year. Difficulty was being experienced in securing badges and that had involved delay in distribution in some cases, but the situation was now improving slightly. During the year there had been gained nine King’s Scouts, eight First-Class, five Red and White Cords, Six Green and Yellow Cords against 17, 12, 0, and 8 in the previous year.

Presenting the Handicapped Scouts report. Mr. Slater said he was pleased to report there were no new serious cases last year. One or two boys had been in the Infirmary for short periods,  but subsequently recovered. Of the three prolonged cases two of the boys, he was delighted to report, had recovered sufficiently to undertake light work. Thanks were again due to the members of those Troops who had continued to visit the Cornwell Scout, Sam Cooke.

The report of the Sea Scouts was read by Mr. Capstick in the absence of Mr. W. Rutherford.

County Ald. T. W. Helme, County Commissioner, also referred with regret to the loss sustained by the Association in the death of its President, Sir James, and on his suggestion those present rose and stood in silence for a brief space.

Continuing, the County Commissioner appealed for support to raise funds for the Baden Powell Memorial, which would take the form of a Central Headquarters in London, housing all the administrative offices and offering accommodation for visiting Scouts from overseas and the provinces in this country. There must be hundreds of old Scouters in the district who would be glad to give a subscription to this project. He added that Headquarters hoped the total raised would represent roughly £1 per member. On that basis the Lancaster Association’s quota would be at least £600, and he felt that the sooner they commenced their task the better.

The Mayor was thanked for the use of the room, and for presiding, on the proposition of Mr. F. G. T. Adams, seconded by Chief Inspector H. Bennett.

* Frederick Guy Trevenen Adams was born 27 Oct 1880 in Croydon, Surrey
In the 1881 Census he is living at 20, Sydenham Road, Croydon, Surrey – his father being Frederick Glynn Adams born in 1853 in Uffculme, Devon, a Solicitor.

And in 1911 they are at 9 Westgate Road Beckenham, Kent:-
Frederick Guy Trevenen Adams Civil Engineer age 30.